Today marks the second annual World IPv6 Day, though it’s probably the last since this time it is to be made permanent. This time last year, major Internet players such as Google, Facebook, Yahoo! and Akamai all switched their public services to an IPv6 friendly state.

In practice, this simply means providing an IPv6 address via public DNS so IPv6 friendly ISP’s can connect to them, which allows us in the industry to identify common pitfalls or problems early on. No such problems have been reported (other then minor DNS replication issues which plague every DNS related change).

Currently, few ISP’s offer IPv6 to the home, usually with good reason. There’s nothing IPv6 can do that its predecessor cannot at this stage in its deployment, and contrary to popular belief, IPv6 is not any more secure. 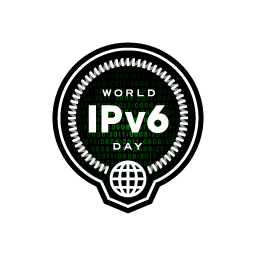 But security isn’t the driving force behind IPv6, capacity is. The new protocol provides an incredible 340 trillion trillion trillion addresses, that’s the equivalent of 67 billion billion per square centimetre of earth, easily conceivable that every fridge\freezer, car, phone and desk\house could have its own IP address. Cool stuff, ey?