Whenever Google releases a new piece of funky software for the world to play with, it’s usually big news. They seem to be taking on everyone, and releasing things left, right and centre. Today, they new toy is much bigger then usual… today it’s a web browser.

I’m going to mention now that Google Chrome is a web browser… just a web browser. I’ve actually read articles where ill-informed writers have dubbed it ‘an operating system’, some even went as far as saying it will rival Windows! This couldn’t be further from the truth.

Chrome is Google’s answer to the world of Web 2.0. In reality, I honestly don’t think Google created Chrome to rival any of the existing browsers. In fact, I believe they needed it to support their own growing list of Web 2.0 savvy sites that just are too much for the slower browsers of the 90’s. Chrome boasts better support for modern ‘web applications’.

OK, admittedly they may be on to something. Web 2.0 has exploded into complex, java hungry sites which simply go beyond the realm of the ‘request response’ architecture… but lets not forget – they still use HTML, XHTML, CSS, JavaScript, AJAX etc etc… they aren’t OS free yet ;)

So no matter what you hear – Chrome is a web browser, simple as that.

Chrome hasn’t officially been released yet. It’s still in beta testing. As of writing, we managed to get hold of 0.2.149.29. As with most Google Products, you simply download the installer, and it does the rest, ensuring you always get the latest version.

There isn’t really much to say about the installation of Chrome (and it will probably change with the final release anyway). It’s a basic browser installation with one interesting twist… the default installation path is not Program Files as you would expect… but rather it installs entirely in your user profile. the I had to make another pass at that, because I didn’t notice it before. Re-installing Chrome confirmed that there is no option to change the installation path, and your forced to have it install to C:\Documents and Settings\<Profile name>\Local Settings\Application Data\Google\Chrome. This makes transferring Chrome much easier, but presumably it would be much harder for administrators to keep track of which machines are running Chrome and which aren’t.

When Chrome first starts, it hits you with the typical good looks you’d expect from the flagship application of Web 2.0. It features tabbed browsing (Opera still had it first!), and the handy little short cut to most visited sites on the home page (similar to Opera’s speed dial). Another tab loads to show handy ways of searching – by typing straight into the location bar (hmmm, I swear they just re-branded Opera!).

The whole application is extremely simplistic. No main menu along the top, instead the tabs fit nicely along the border of the application, and only the basic navigation buttons are present to begin with, something I’m hoping I can change later.

All the basic things we come to expect are there, text zooming, favourites, view source within Chrome, quick link to clear browsing data etc, though we’re more interested in what appear to be the unfinished aspects of Chrome, because we ran into some Java difficulty.

We installed JRE version 6, update 7 – the recommended release on Sun’s website and tested it with Firefox which successfully proved java worked great. However Chrome had problems, and reported that the plug-in was missing. I wasn’t too shocked by this – after all it’s only a beta. But somewhat confusing since one of Chromes main selling points was a faster V8 Java engine. After a little investigating – we discovered that running Chrome on JRE version 6, update 10 (an early access release) seemed to work a treat. Problem solved :) 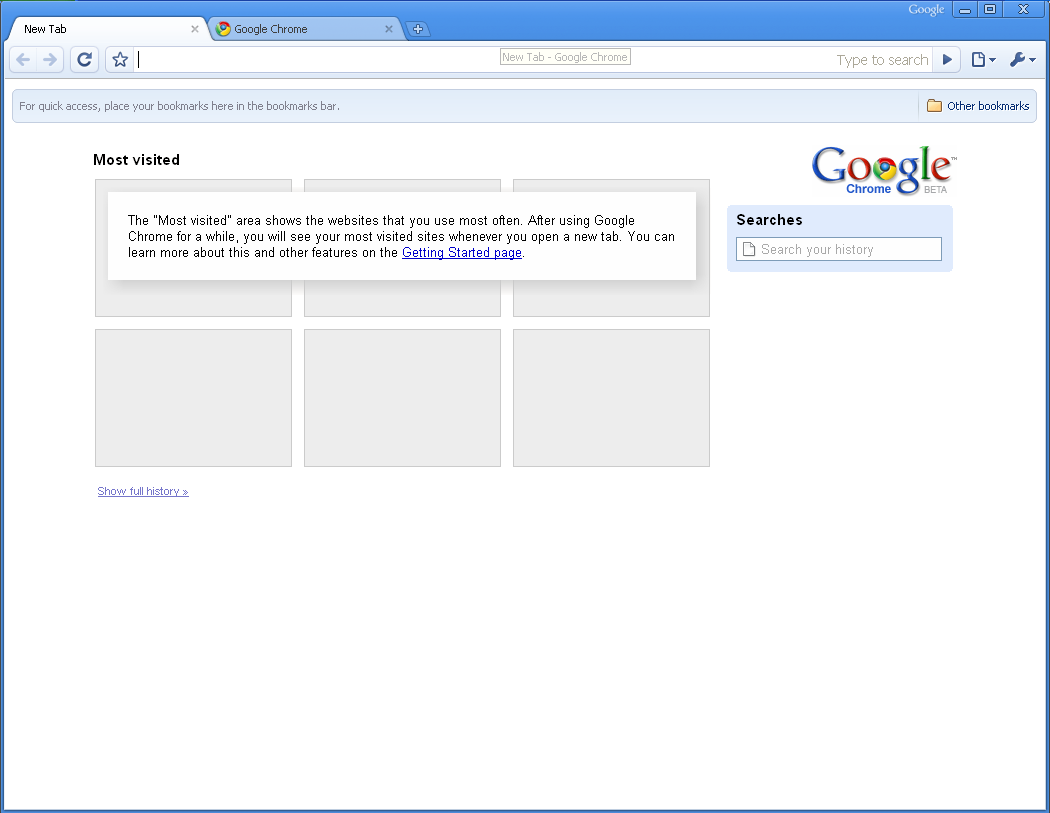 Chrome and the Internet

We didn’t run into many other issues once the java was working – everything else just seem to slot into place. We thought just to be sure, we’ll test a few non-Google applications to see what happens, the results were as follows:

Live Search Maps: Worked well, not notably faster then any other browser.

Yahoo! Mail: Worked well and surprisingly faster then others, though we were warned a plug-in was required, but it disappeared before we could check which one.

New Facebook: Nothing to report here. Works as expected, even the instant messenger function. Interesting Chrome offered to store our username and password – something it did not do for the other sites.

The mother of all Java apps - Blue Coat ProxySG Management Console: Yes we had a quick test with this. Actually somewhat faster then the recommended IE!

I’m sure there’s more ‘apps’ we could test, but these were the ones I felt necessary. Chrome made easy work of them, showing that perhaps Google have done more tweaking under the hood then I anticipated.

Chrome also passed the ‘Acid2’ test (http://www.webstandards.org/action/acid2/) with flying colours, something that I was expecting it to trip up on… it seems this billion dollar corporation can read RFC’s as well as write them. So practically speaking - Chrome appears ready to be on a desktop near you. We can’t just believe what we see though, and thought it’s time to take a look under the hood.

We thought it would be interesting to see if we can spot any early quirks Chrome users are likely to have. First up… FTP support. Ever since Microsoft gave FTP the finger by removing integrated support from IE7, the market has been left a little confused. Naturally I hate the idea of using FTP within a HTTP browser (especially for uploading), but there’s nothing wrong with the ‘snatch n’ grab’ method some browsers use for simple FTP transactions. Chrome was no exception, visiting an FTP site with the ‘ftp://’ schema resulted in a username\password prompt – followed by a directory listing.

On the HTTP side of things, Chrome identifies itself as:

There’s also no choice about what HTTP protocol to use, it’s HTTP/1.1 or nothing, even when using a proxy server. It seems Google have done away with the outdated methods\protocols. Chrome also uses the Windows proxy server settings rather then its own independent configuration. 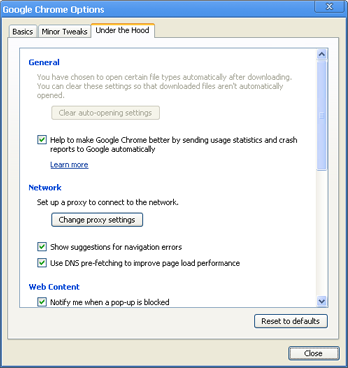 It seems Chrome also prefers TLSv1.0 for all its SSL transactions. SSLv2 is an option you can enable if you wish, though strange there’s no mention of SSLv3.

Google also promised that should one tab crash – the entire application will remain stable, since each tab runs as a separate thread. Chrome seems to start two processes, consuming about 30mb of memory. This increased with the general rule being “number of processes running = number of tabs open plus 1”. This increases even more if you run heavy Java applets within the tabs, meaning Chrome can suffer from a very large memory footprint.

In a paranoid world, you need a browser you trust, lets see how Chrome helps out.

A nice little touch we found is the way Chrome warns you of invalid SSL certificates on websites. Depending on the nature of your request, Chrome tries to be a little more helpful about what’s actually happening. For example, visiting www.amazon.com using its IP address should render the certificate invalid for our Chrome client, indeed it does – and Chrome has picked up on this:

I like the nice little touch of crossing out the https:// schema to bring home the fact that something isn’t right. Google certainly took advantage of the advice techies tell non-techies alike: “just make sure that bit says https!”

Chrome does go to good lengths to ensure the Apple loving hippie of a user knows what’s going on in non-technical clever (idiot) speak – and when visiting secure websites, Chrome mentions the most important things a user should observe (bar one entry we couldn’t figure out why you’d want to know… try and guess which one).

Almost completely transparent to the user, Chrome also has a safe browsing initiative somewhere buried within it. There are no configurable options that we can see, but looking at the traffic coming from Chrome, we see multiple HTTP post requests to safebrowsing.clients.google.com. We couldn’t find out much about it, and the Safebrowsing plug-in for Firefox is what we assume is making these requests, ironically trying to install it wanted to install the ‘Google Toolbar’. 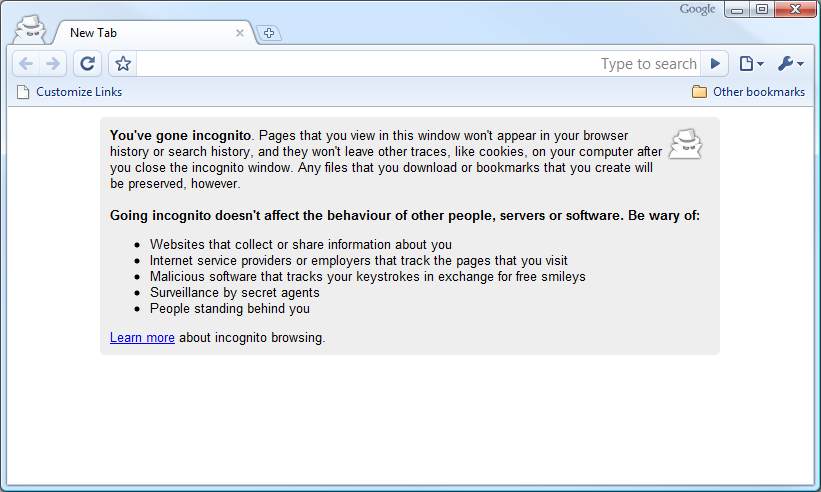 Google Chrome seems like a nice little browser, that’s actually quicker in some respects. It’s designed to be more robust and stable when faced with stupidly large web based applications, which it seems to do quite well. It’s good basically.

However I don’t think it will replace my trusty Opera just yet. The web browser is probably the most used application on most computers, and you need to get comfortable with it, I like having my shortcuts, mouse gestures etc, Opera feels like a fully kitted out, comfortable family cruiser compared to a small light car that is Chrome.