Despite the various specifications of USB, its wildly different power output abilities and the intricacies of available port types (standard downstream, charging downstream, dedicated charging) – the number one complaint from most people is the sheer unfriendliness that is the physical connector, and its incredibly crap ability to be plugged in correctly first time.

Well no more! Thanks to the new USB specification released alongside USB 3.1, USB-C introduces a new smaller connector which as well as supporting a theoretical throughput of 10Gbps, has a reversible connector!

I’m sure it’s self explanatory, but just to be clear, this means the superposition state that Intel coined is no more – the connector can be inserted either way and will still function. 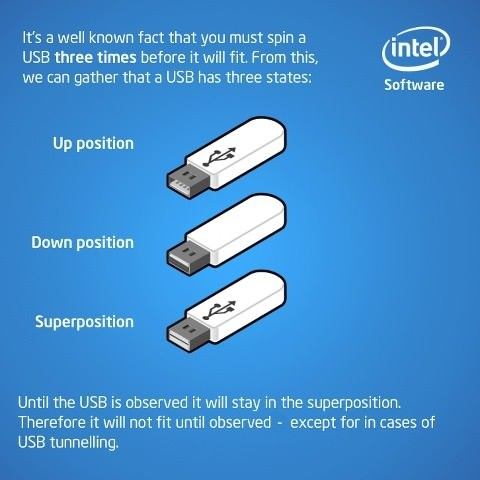 Apple have announced the new MacBook will come with a USB-C connector, and others will surely follow this year. The standard allows for more charging power also, with the aim at powering decent sized SSD’s, and of course all the tablets and phones you can through at it. The 10Gbps also brings USB back in-line with Ethernet, making those quick copy and paste jobs via USB sticks more attractive then the network once again.