When most people think of the internet, they think of webpage’s. This is understandable; Websites make up a good 50% of the internet. This is a pretty big chuck of the World Wide Web, something software makers such as Microsoft saw the potential for, and that’s when the browser wars begun…

Today, the main browsers that pop into web-surfers heads are Internet Explorer and Netscape. This makes sense since they are two of the oldest browsers in the world, with Netscape being one the oldest by 1 year, released in 1994. Although it’s common knowledge that Internet Explorer is the dominant browser still, it was never always like that.

Although in the late 80’s\early 90’s, Microsoft had almost every new desktop running Windows 3.11 or Workgroups, it never included a browser. We all know Windows 95 broke the mould in 1995, but the Internet had started to develop before this product came to light, and Microsoft didn’t have a browser on people’s machines.

Also, I’ve heard people answer the following question with the answer ‘Microsoft’. Who Invented the Internet? This couldn’t be further from the truth. The truth being the Internet is not a single product that can have an founder, Tim Berners-Lee invented the code used to display webpage’s, and Ray Tomlinson was responsible for sending the first email, and even choosing the @ character, now know to be the worlds most widely recognised symbol for modern communication. When Tim Berners-Lee was designing the ability to display visual data from a centralised source, he also wrote a small program to display it - Mosaic.

Mosaic was developed by the NCSA (National Canter for Supercomputing Applications) for use in developing and testing the new protocol’s designed for the new Internet. Once they had succeeded, they later developed a commercial version, called Netscape Navigator. This was still back in 1992\1993 so Internet explorer still did not exist, and Windows never had a browser included. Microsoft weren’t too interested in the Internet at this time so Mosaic\Netscape was able to grow a little further into Netscape 2.

Up until 1995, Mosaic was really the dominate browser. With Netscape being used in the home and companies that could afford a connection to the Internet, and Mosaic being tested and developed in Universities and laboratories.

However, in 1995, everything changed.

The rise of Microsoft Windows

Windows 95 was released in, miraculously… 1995. It contained a browser already installed, which removed the need for users to obtain Netscape. Remember, in 1995, downloading Netscape was out of the question. Everything was either on diskette or CD. So it was far more convenient to use the browser your system already had.

Internet Explorer 1 didn’t really contain anything new or better over Netscape, in face, since the original Mosaic development was an open-source project. Microsoft used this to their advantage and actually created IE out of Mosaic. This is still evident today by looking at the ‘About’ box on any Internet Explorer installation: 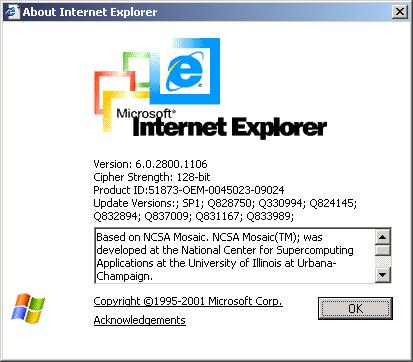 As you can see, Microsoft took the time to mention the NCSA’s work. So as you can see, in 1995, all three main browsers were based on one simple project - Mosaic.

Because of this, competition wasn’t really that important. Users had a choice, but knew it was all the same product. Netscape saw this problem, and understood that users will simple go for what’s there, rather then the better product. So they started improving.

In response to Microsoft’s convenience browser, Netscape started to give Internet users a reason to use their software. With the release of Internet Explorer, Netscape released version 1.1, then later version 2. Netscape started to focus solely on their commercial browser and development left the universities and went into a Netscape development company. Version 2 was finally ready in 1996 and included a host of new features which have made the Internet what it is today. They introduced us to JavaScript, frames, applets, and even bundled in a mail client, though it didn’t work very well.

Internet Explorer, still working on the basic Mosaic shell, wanted to move away from their Netscape base. Microsoft re-coded Internet Explorer to a more Windows specific model, and introduced other features such as DHTML.

1996 was where the two browsers went their separate ways, Mosaic had started something big, but research and development had done its part, the rest was business.

Did someone say Netscape 5?

A lot of people have been asking recently ‘What happened to Netscape 5?’ It’s true, there is no Netscape 5. Although no official reason for this version jump has been giving, a few obvious conclusions can be drawn.

Microsoft new they would be able to entice new users to use their browser since it was in front of them shortly after un-wrapping their new computers, so they focused on features. Internet explorer climbed through the versions from 1995 to 1998, and by 1999, they were on version 5. Netscape however had a massive let down with their release of the buggy Netscape Communicator 4. Internet Explorer was already working on version 6, but due to bugs, version 5.5 was released as a fix. Netscape were working on their ‘Gecko’ engine to be used in version 5, however due to the sale to AOL, Netscape delayed this release.

Finally, by 2001, Netscape were ready to release their next version. However, IE were about to release IE6, so Netscape released their new version as Netscape 6.

This was most likely done because features were becoming less important and security was becoming the main focus. With the internet playing even more important roles in people’s lives, users wanted to be sure their browser was the latest, most up-to date in security. Naturally, Internet Explorer’s version 6 would have sounded better then Netscape’s version 5.

Playing by the rules

Microsoft also managed to create one hell of a mess when it came to specifications. Basically, when a language\technology is created that enables developers to do something, for example, play animated shows on websites, the creators write up a RFC (Request For Comments) or specification document detailing how it should be implemented, used and maintained. Companies and other developers that wish to use this technology in their products should adhere to the specification in order to ensure compatibility with other technologies. Unfortunately for us, Microsoft decided to do their own thing.

Netscape (except for version 4, which was just a mess) has always been very good at doing things by the book. When you visit a website in Netscape 7, your view the page as it should be viewed. It may not look correct, or may even look less-presentable then Internet Explorer will view it, but it’s displayed exactly how the code was meant to be interpreted. Internet Explorer on the other hand, changes the code to suit Internet Explorer, hence why some websites look different in Netscape and IE.

This will not affect the ordinary Internet user, and in some cases, actually improves the experience, but for developers, Internet Explorer is a bad apple. Writing strictly correct code will not display strictly correct results, and Internet explorer also contains many undocumented bugs that create even more work for coders.

New kids on the block

By around 2002 - 2003 the browser was won my Microsoft. Netscape had about 10% of the browser market, and they were having trouble producing new versions.

With Internet Explorer way ahead in the lead, Netscape having financial problems with its parent company AOL, and Microsoft basically making it as hard as possible for Netscape to co-exist on the same machine as IE, Microsoft could relax a little and start working on other things.

But it turns out they relaxed a little too much.

Over the next year from 2003, Internet Explorer was neglected, Microsoft were busy working on Operating Systems and Office applications, bugs were discovered more and more often in IE, while Microsoft sat idle. Finally, the bugs were exploited.

2004 saw the great rise of spyware. Mostly thanks to Internet Explorer. The many security vulnerabilities discovered the year before went un-patched, and malicious kiddies decided to take advantage of this. Within months, Internet users were reporting all sorts of problems, from pop-up ad’s to key loggers and Trojans being installed on their machine without permission.

This wave of spyware and adware were thanks to new technologies that Microsoft included with IE, technologies that directly tied the browser into the operating system, increasing the possibilities to what could be done from a simple browser bug. Microsoft were not in a position (or had the will) to fix these issues, and even if the patches were released sooner; too many machines go un-patched for the global problem to sub-side. Computer users and so called ‘experts’ branded the spyware epidemic a ‘general modern computing issue’, when in reality, it was brought on by one company, one product.

Fortunately, the computing community took matters into their own hands.

By the end of 2004, those in the know were looking to save themselves from the spyware and move away from IE. This created a demand for a new range of browsers. Opera, Mozilla, and Firefox to name a few. But could they succeed on just improved security alone?

Opera had been around since 1996, but was mostly unheard of, until people started looking. Opera noticed that since IE won the browser war, they stopped adding features. From 2000 to 2004 - Microsoft never really changed the way IE worked.

Opera however, started working away with new features, such as mouse gestures, skins, shortcut keys, and multiple tab windows. Things which vastly improve web surfing experience. Microsoft had neglected such new features, and when users went in search of better security, they found a lot more then they expected.

Opera, Mozilla and Firefox move in

Once news of the spyware solution hit the World Wide Web, users started trying out such new browsers as Opera, Mozilla and Firefox. Although some had been around for a while, they started bundling in new features, mail clients, and improved newsgroups readers etc. Users finally found a browser that improved computing in general.

Now, at the end of 2004, Microsoft has a lot to worry about. The browser wars seems to be heating up again, distribution of new, free software is so much easier with broadband and users want a product with promising features, speed, and less bugs. Something no browser will ever be, but something Opera and such companies are striving to create.

http://www.opera.com- Opera, free for use, though you can register to remove a small banner ad.

http://www.mozilla.org/products/mozilla1.x/ - A cut down version of Firefox