If Mythbusters advice is to be taken seriously, I’ve always liked the saying “if it’s worth doing, it’s worth over-doing”, and what better way to achieve this then to try out an old classic by installing VMWare Player, loading a Windows 98 virtual machine and installing Theme Park.

You’d think VMWare would have this covered right? Not so. It all works great until you actually play the game and see it running as if it’s just had all the caffeine in the western hemisphere, in short – there’s no frame limiter on these old 1990’s games, and they just run too damn quick. Unfortunately VMWare has no CPU cycle limiter built in, it’s just not something people generally want to do with virtual machines.

Cue DOSBox, a free and very well made DOS emulator. I’ve used it in the past for various DOS related programs, but let’s see how it handles the CPU issue.

First up, get it installed and then edit your main configuration file. It usually lives in your Windows user profile, typically within AppData\Local\DOSBox. You’ll see the config file named after the version you’re running. I made the following tweaks to get Theme Park working well, but this might be useful for any other DOS game around the same time:

First up, resolution changes and full screen mode (also sensitivity is for the mouse):

I experimented with various CPU modes, but auto worked fine, the crucial change being to the cycles:

The two mounts make my “DOS Games” directory the C drive, and also give me direct access to the CD drive.

The results were great – there’s a few glitches (mouse seems to die occasionally when switching to high resolution mode within game, but don’t move the mouse during, you’ll be fine). Even the cut scenes work OK when visiting a ride. Next up, Theme Hospital! 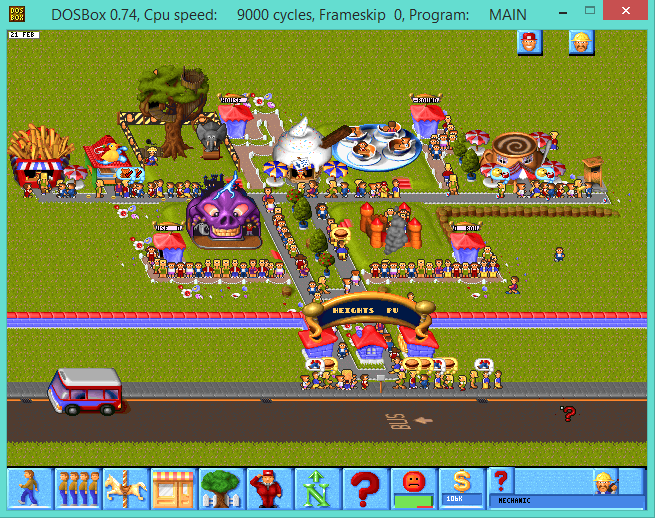